After switching from U-Verse 300 to Lightning90 I was surprised by the speed test I ran and was disappointed by aging cable services.

If internet was the only thing being considered, I would declare RoadRunner winner without any competition whatsoever. The truth of the situation is quite different, as both providers offer bundled Internet/Phone/Cable Television.

Imagine our chagrin when we discovered Brighthouse is still offering the same dismal DVR and streaming service they were two years when we left them for U-Verse.

We found U-Verse offers a more advanced and functional DVR service and rarely did we see a scheduling conflict as there were enough tuners on the box to accommodate our recording and viewing needs. The storage capacity of the Brighthouse DVR is also dismal. We never had to consider that we might be filling up the U-Verse offering, while the Brighthouse box stays 30-50 percent full recording less than a dozen shows in high definition.

And the Brighthouse remote is an engineering failure. Really, do we need three sets of left and right arrows all performing different things? By extension, when a commercial break is being fast-forwarded the Brighthouse offering has to be guessed as to when to hit play again. The U-Verse box typically starts playing exactly at the moment being seen in the fast-forward.

Use the RoadRunner Lightning Product for your internet, streaming, and gaming needs.

Use anyone else for the cable.

About ten weeks ago Brighthouse gave free speed upgrades to thier top-tier clients. The following is one of the faster tests: 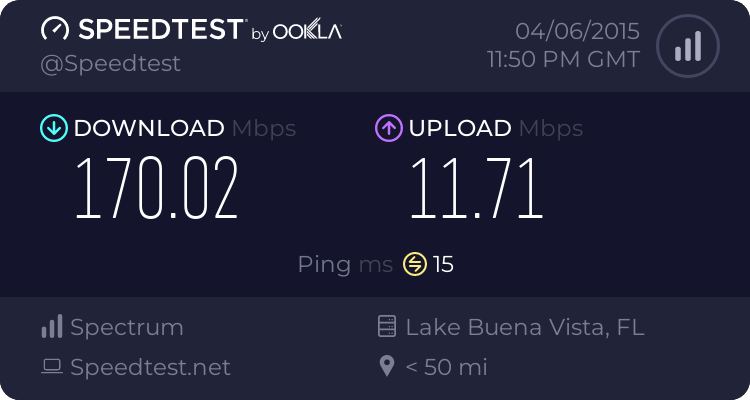 W. Shawn Wilkerson began using computers in his early teens and has built, sold, fixed, installed, rescued, administered, discussed, and programmed them since the 1980s.

Computers:
A dozen degrees, and three decades of experience come together in informed reviews.
© 2014 - W. Shawn Wilkerson. All Rights Reserved.